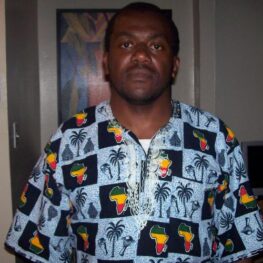 Mr. Senfo Tonkam is a former Cameroonian student leader currently in political exile and refugee in Germany. As an activist of the Black Community in Germany, he has participated, organised, led and supported numerous actions, organisations, movements and projects against racism, imperialism, capitalism, neo-colonialism and for the liberation and unification of Africa and Black people worldwide.

After most Pan-Africanists, Afrocentrists, nationalists, leftists, environmentalists, Rastafarians and other progressives on the Continent and in the Diaspora supported Obama, he concluded that these ideologies and movements had failed. He thus founded a new ideology of African liberation and reconstruction in the form of two theories: NubiaKemet and Maat Revolution.

Maat Revolution defines a new ethic of African revolution, while NubiaKemet proposes the new African political system and the architecture of the new African state of tomorrow.

Mr. Tonkam is a former lecturer for anti-racism and intercultural communication at the University of Hamburg, a social worker for refugees, immigrants and undocumented migrants, a lecturer, trainer, commentator and political consultant, a translator, a licensed coach and licensed football referee.