An intersectional culture of memory for a more equitable remembrance 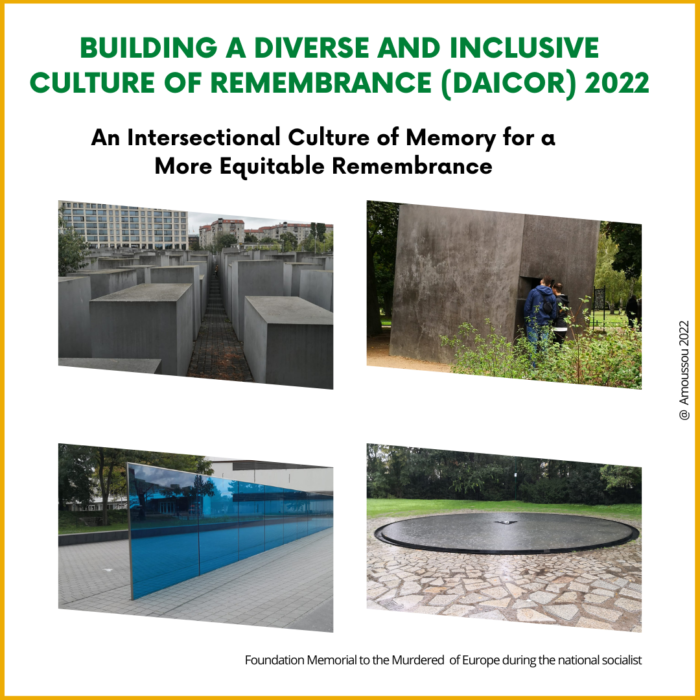 An intersectional culture of memory for a more equitable remembrance

‘’No one is on the right side of history’’ was the sumarry  of my first day work with the DAICOR team’s, which included a visit to the Holocaust Memorial in Berlin. The memorial includes 2711 dark-grey monoliths erected to honour the murdered Jews by the National Socialist regime. The persecution during this regime was not limited to the case of Jewish people, several social groups including Roma, Sinti, etc. were persecuted and killed. According to an estimate from 1950, 2000 people survived detention in concentration camps and 3000 escaped detention in a concentration camp, however, many of them were forcibly sterilised in 1943. There are no official statistics on the number of Sinti and Roma in Germany in 1945.

While we were talking about groups of people killed because of their social affiliation or position, the history of the socialist regime also knew how to use science as a weapon with the result of a medical crime that does not say its name. Indeed, whether these people were Jewish, homosexual, black, young or old, children or parents, their only crime was their visible or invisible disability. People living with a disability were condemned to die through the implementation of the Aktion T4 project. Unlike the Holocaust, there were no survivors of the T4 project, these are the words of Professor Kenny Fries who in a  short film on youtube says a lot about the Aktion T4 project. This project refers to the campaign to kill people living with a physical or mental disability, carried out under the National Socialist regime from 1939 to August 1940. Between 70,000 and 80,000 people lost their lives due to this medical crime.

No one is really on the right side of history, every oppressed group hides another. The memorial of the persecuted homosexuals during the National Socialist regime says it all. The memorial that is supposed to represent German responsibility for the persecution of homosexuals also reflects the partial and not complete side of history. Indeed, when talking about the persecution of homosexuals under the National Socialist regime, one tends to forget about lesbians, bi-sexuals,….. I’m curious to know what happens to all these lesbian women who were psychologically and physically oppressed and forced to have sex with men and to undergo a process of so-called healing of their sexual orientation? A legitimisation of rape thus became a de facto instrument of healing for these women. Still, this discussion about the oppression of lesbians is controversial and there is little evidence to support this. This is not surprising, as a male-centred history reveals very little about women, their struggles, oppressions, etc.

The drama of national socialism seems to me to be quite complex and the culture of remembrance around this history even more so. Out of this complexity, these important points come to my mind, to be taken into account in the process of establishing a memory culture that I want to share with you:

Finally, the culture of remembrance must be fully included in the narratives and history of each country. Is this the case in Germany? Where is Germany’s colonial history integrated into its culture of remembrance? The walls of the German parliament, which describe the stages of German history from the national socialist regime through reunification to a democratic state, tell us otherwise.

This will be the theme of the next publication of the Black Academy  in which I will share another experience with you: A little bit of black knowledge for more light in German history: filling in the gaps of Germany’s colonial history.

6 days of exchange around the culture of remembrance : a cultural journey based on the experience of a participant in the DAICOR project.

At the school of inspiring personalities of their community: The Black Academy was there